A common technique of Linux kernel rootkits is to overwrite the function addresses in the syscall table. Syscalls are the main way usermode programs interact with the kernel and underlying hardware, so by altering (or ‘hooking’) the syscall table, rootkits can change the data reported by the kernel to hide anything incriminating, such as a network connection to a command and control server, or a running malware process. 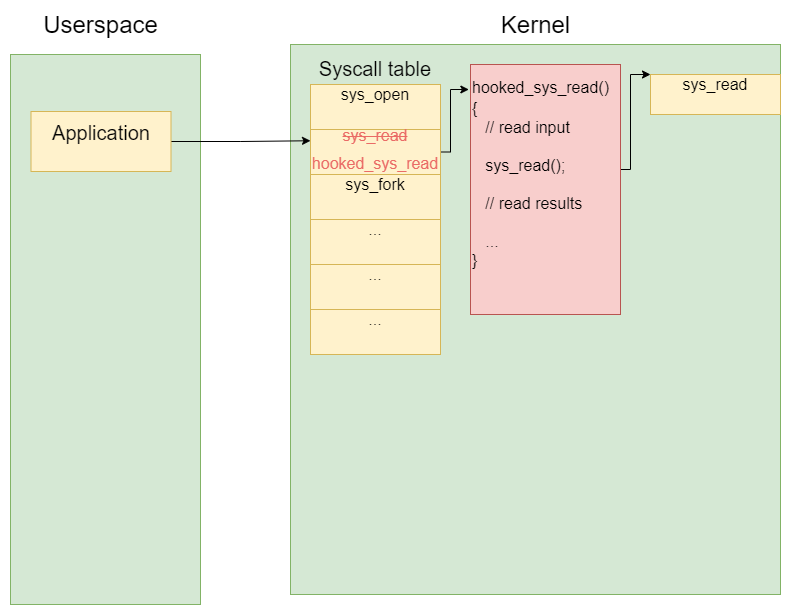 On older kernels, hooking the syscall table was as simple as:

Newer kernels make it slightly more difficult, but it is still a very common technique. By replacing the main entrypoint to various syscalls, Kernel rootkits have control over what gets sent to and from the kernel, and can decide whether to even call the original syscall function.

Diamorphine a great example of a Linux Kernel rootkit, and being open source we can clearly see that it hooks three syscalls:

Kill is used to send signals between processes. Diamorphine uses this as the main command-and-control:

By hooking the kill syscall, Diamorphine first checks if the signal is one of these magic numbers. If it’s not it will pass the signal to the read sys_kill function, otherwise, it will instead do one of its special actions.

These syscalls are used by functions to list the contents of directories. Diamorphine will call the read syscall function, then check the return data to remove any files or folders it wants to hide from the user.

This is also how it hides processes: Tools like ps list processes by looking in the /proc/ folder, as each process has a pseudo-folder there that contains the details about the process’ PID, commandline, etc. By hiding a process’s folder in /proc/ you also hide it from ps and other tools.

One of the coolest lesser-used features of eBPF is the ability to record stack traces of a function call, showing what functions were called in both userspace and the kernel, leading up to the function eBPF is attached to.

This is great for debugging, but also super useful to detect when a function or syscall has been hooked: if we know what functions should be in the stage trace without being hooked, we can tell when the hooked function has inserted itself into the chain.

To test this, I first created a simple eBPF Program to record the stack trace from all kill syscalls:

Then I used the libbpf-bootstrap code as a template, but changed the handle_event function:

So on this machine, there are only 2 stack frames. To find out what functions these addresses corespond to, you can look in the psudo-file /proc/kallsyms. As the stack addresses are unlikley to be at the start of a function, you need to look for the closest address that occurs before your target address. This still might not be accurate as the stack could have come from a non-public function (which would not be visible in kallsyms), but it’s a good test, and doesn’t require you to re-compile the kernel with full debug symbols.

In my case, the addresses corresponded to:

This all lined up with my understanding - The last stack frame is the syscall function, and the first is possibly the main syscall entry function after the hardware interrupt.

Next, I installed the Diamorphine rootkit and re-ran the eBPF Program. This time I got a different output:

I could now see a third stack frame in between the expected two. Looking in /proc/kallsyms, the address appears to be in do_syscall_64, but that’s not quite right. I’m not sure why the address inside do_syscall_64 is listed, instead of the Diamorphine function hacked_kill, which on this machine was at 0xffffffffc0962000. This is something I plan to follow up on once I understand more about how bpf_get_stackid actually works.

However, even if the address wasn’t correct, I could still tell that the syscall had been hooked, as a new stack frame was inserted in between the two expected frames.

This works when the real function is called, but what happens when you run kill -s 63, which is one of the special Diamorphine signals that doesn’t get forwarded to the real syscall?

As the real syscall function is never called, neither is our BPF code. One way to detect when this occurs is to run two more eBPF Programs, attached to raw_tracepoint/sys_enter and raw_tracepoint/sys_exit. These are always run before the syscall table is looked up, and should be run irregardless of if the real syscall function is run or not. This means you can:

By combining the stack length and raw_tracepoints checks, you have have a decently reliable way to detect when rootkits like Diamorphine are being used.

Hookdetect is only meant to demonstrate the idea of using stack traces to detect dodginess. But it comes with several limitations, that could make it challenging or impossible to implement in a production environment:

Intercepting and analysing every syscall on the machine would almost certainly have performance impacts on real/production systems. This could be improved a bit by only looking for specific syscalls, or only running for a short period of time.

Not only syscalls get hooked

Some rootkits such as Reptile don’t hook the syscall functions. Instead, they hook other functions inside the kernel such as vfs_read.

These functions may be called legitimately from many different places inside the kernel, and even legitimately by other kernel modules, so more work would be needed to determine a normal stack trace from a hooked one.

The goal of this blog was to explore one way eBPF could be used to detect kernel rootkits, as well as demonstrate how to use bpf_get_stackid to lookup stack traces. The code and more references are available on GitHub.

Apologies if this blog was a bit more disjointed than usual, it was written over the course of the month as our family dealt with lockdowns, sickness, and daycare.