I created a tool to run arbitrary programs as Protected Process Light (PPL), then used this tool with Sealighter to get events from the Microsoft-Windows-Threat-Intelligence ETW Provider.

(Note this isn’t the best description of PPL and AntiMalware, sorry) There are some processes and services on Windows that Microsoft doesn’t want even Administrators to be able to inspect or tamper with. An example would be programs that provide AntiMalware capabilities - if an administrator could simply tamper with these processes, then so could a malicious actor with high enough privileges.

When AntiMalware processes are started, they have a special flag inside their EPROCESS struct in the kernel, that marks them as a Protected Process Light, or PPL. Both the Binary and any DLLs must be signed by Microsoft, with a certificate that also signs a corresponding Early Launch AntiMalware (ELAM) Kernel Driver. In order to get an ELAM driver signed, you must submit the driver to Microsoft, who will assess it to ensure both you and the driver are legitimate and not a danger to users.

This is an involved process, however if you are able to convince Microsoft you are legitimate, processes run as AntiMalware PPL have a number of special characteristics:

The 3rd point was the most interesting to me - Regular programs can subscribe to this Provider, but the kernel will only send events to processes that are marked PPL. So I wanted to learn what the process was to create PPL process and if it was possible to get my Sealighter ETW Tracer marked as PPL, so I could see that events from the Threat-Intelligence Provider look like.

Due to the requirement of having to submit code to Microsoft to review, even if you have a legitimate code signing certificate (or “find” one), this would not be enough to create an ELAM driver and PPL service.

You could use James Forshaw’s technique of doing shenanigans such as injecting into an existing PPL process, but I wanted to learn at how to create a legitimate ELAM driver and PPL process.

So instead I opted to put my test machine into testsigning mode, which alters Windows behaviour a little bit, but otherwise allows us to sign our own drivers and programs with Microsoft. This is done by running the following and rebooting:

To generate a self-signed code signing certificate, we can use PowerShell:

Note: It is important that the certificate was hashed using SHA256, and that is has both the ‘Code Signing’ and ‘Early Launch’ EKU text extensions.

To sign any binary with this certificate, get signtool.exe from the Windows SDKs and run:

PPL Processes are typically services, and must be assosiated with an ELAM Driver.

The ELAM Driver doesn’t need to actually do anything (mine was just an empty DriverEntry function), and as we’ll see below doesn’t actually need to be installed. However it must have a resource named MSElamCertInfoID, which looks like this:

The to-be-signed hash isn’t the easiest thing to calculate: we can either run certmgr.exe –v on a binary that has been already signed with the certificate, or we can use this awesome PowerShell script from Matt Graeber. If using certmgr make sure to put the hash down with no spaces, e.g.:

Microsoft have an example ELAM Driver on GitHub, and I’ve published my driver code here.

Once the ELAM driver was built with a MSElamCertInfoID resource and signed, we need to create the assosiated PPL service. The service itself can just be a normal service with a ServiceMain, etc., but in order to create the service, we must first create an ‘installer’, which will do two things:

First we need to ‘install’ the ELAM Cert, which in testsigning mode must be done once per boot. In C, this is as simple as:

InstallElamCertificateInfo Will look in the MSElamCertInfoID resource, check the certificate is valid, and install it. The driver can be anywhere on disk, and once the certificate is installed, we don’t need it again, and don’t need to actually run it. However in testsigning mode this step needs to be repeated if the machine reboots.

Once the certificate is installed, the installer can now create the service and mark it as AntiMalware PPL:

If the steps above completed successfully, then we can start the service from the commandline:

An Administrator can start the PPL Service, but they cannot stop it once it starts. To confirm the process is marked as PPL, we can open Process Explorer from Sysinternals, then look in the ‘Protection’ column, which should look like this: 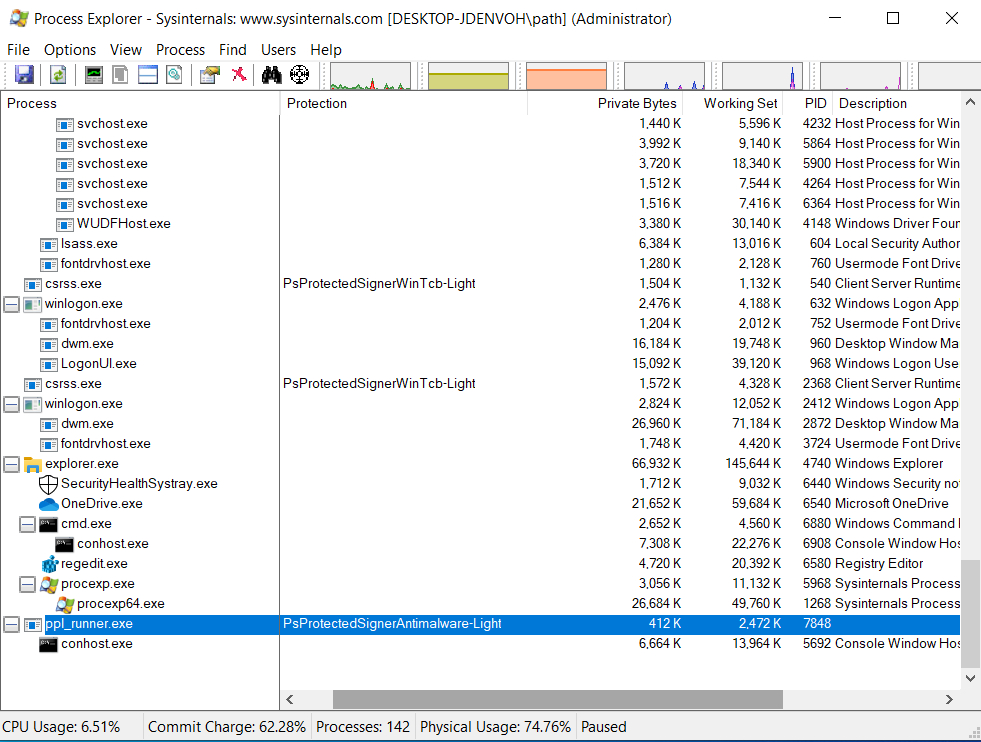 Following the above process, we now have our own service with arbitrary code running as AntiMalware PPL.

This alone should be enough to start experimentations, however I wanted to be able to run any program as PPL. But a service must have a ServiceMain, and do other things services do.

I wanted to be able to take any regular executable, either mine or other people’s, and run them as PPL to see how they behave.

It turns out PPL Services are allowed to call CreateProcess to run arbitrary binaries, provided:

From the service, we just need to pass a few extra values into the StartupInfoEx struct:

If everything is successful, the service will start the child process, which should also be marked as AntiMalware PPL.

Putting it all together - PPLRunner

I’ve combined all the above techniques into a tool I’ve called PPLRunner.

PPLRunner is an ELAM Driver and PPl service that when started will:

It has made it easy to quickly start any program as PPL, so I could test out what I can and can’t do as PPL.

The project signs all the binaries at build-time with a self-signed certificate, and provides the certificate and key to sign other binaries as well.

Now I had the ability to run (almost) any program as PPL, I wanted to see what events from the special Microsoft-Windows-Threat-Intelligence ETW Provider looked like.

A while ago I created Sealighter, a program that can subscribe to arbitrary ETW Providers and convert their events to JSON, logging the output to either the console, a file, or the Event Log.

I started PPLRunner and Sealighter, and sure enough as Sealighter was PPL events started to appear in the Event Log: 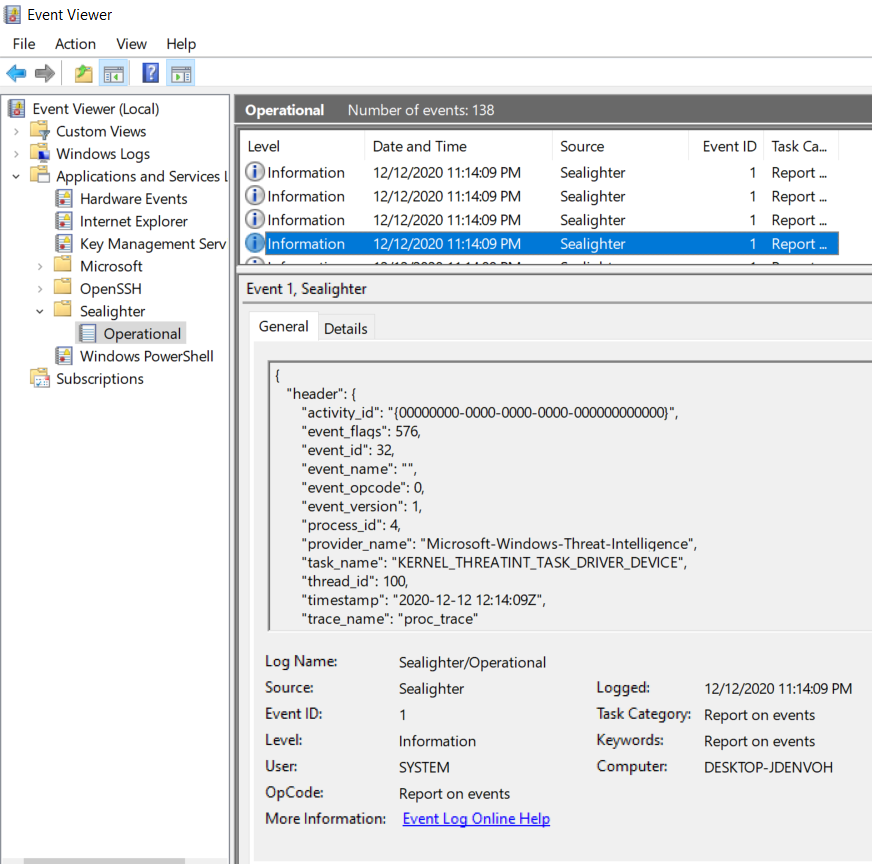 And could then use PowerShell to dump the events to disk:

The end result was numerous events like the following:

This blog is much longer than I expected, but I wanted to share my explorations into PPL and AntiMalware.

I hope both PPLRunner and Sealighter make it easy for others to start learning about Protected Processes and the Threat-Intelligence provider, and encourage others to learn more about what goes on ‘under the hood’ in Windows.